Equipment Mounted Warrior from the Altai 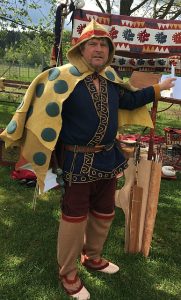 [peg]Unless otherwise stated, the objects shown are reproductions of the original state. If features such as color, object parts etc. were added by us, it is noted.

Clothing: Coat, Pants and Shoes
The rider’s coat is blue and with yellow embroidery. Noteworthy is the close and short cut of the coat, which differs from the other finds of long fur coats from Pazyryk.

The pants are also quite tight cut, should have been made of wool and flows down in the typical felt boots, as they are often known from Pazyryk. Above the boots the rider wears thin leather shoes.
Rudenko 1970: 83-91, Pl. 154.

Cape
Special consideration deserves the cape, which is very short and jagged at the bottom. The light brown-beige fabric is decorated with blue dots. A cloak like this one so far constitutes a singular kind in Pazyryk.

Dagger (Pazyryk Culture, Iron, Wood and Paint, 4th / 3rd century BCE)
Dagger sheaths with four bulges as attachment are widespread in the entire steppe belt from the beginning of the first millennium BC into late antiquity. In the Scythian period, they were in use in the east of the steppe belt and can be found, for example, in in the tombs of Pazyryk culture and Xinjiang.

The dagger shown here is not entirely based on an archaeological find, but is composed of various templates: Dagger sheath and the attached pattern correspond in shape to a specimen from Pazyryk. The technique of the carved motif is known from a dagger sheath from Xinjiang.
Wieczorek, A. and C. Lind (ed.) (2007): Origins of the Silk Road, 295.
German Archaeological Institute u.a. (Ed.) (2007): In the sign of the Golden Griffin. Royal Tombs of the Scythians, 154.

Ax (Pazyryk Culture, Iron and Wood, 4th / 3rd century BC)
While in the west of the steppe belt short and long swords dominate as short melee weapons, above all rider axes are available from the Altai Mountains. These axes had many different appearances, with combinations of ax leaves, pommel and pimples occur on the head.