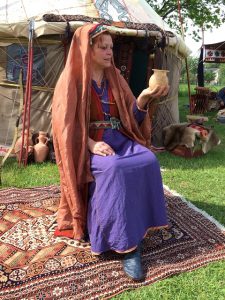 [peg]Unless otherwise stated, the shown objects are reproductions of the original state. If features such as color, object parts etc. were added by us it is noted.

Shortly after the excavation the complex was associated with the legendary Sarmatian queen Amaga / Amage because of the rich inventory the person was suspected to be a high-ranking person like a priestess or princess. Since this legend is but handed down already from the 3rd or 2nd century. BC, this allocation, apart from the mythological basis, should be incorrectly. Nevertheless, we have decided to equip the display with this name.

The clothes of the deceased was barely detectable in situ, since the organic substances were almost completely gone. Only some textile fragments were detected. At the lower legs large scaled embroideries were detected, which formed an extremely complex pattern made by gold thread. Here a piece of raffia mat, which lay below the textiles, contributed the preservation of the fragile tissue. This striking component we initially indicated by placing a patterned silk fabric instead of embroidery.

In addition, many pearls and gold tinsels were found, who had served as cloth-trimming. Based on their position a reconstruction of the clothing of the dead could be attempted. So it is likely that she was wearing a tight dress, which was richly embroidered on the forearms.

Above that she probably wore a large coat with short sleeves, which was locked with a characteristic Dacian bowl fibula from Noric-Pannonian type. This unique fibula we have replaced in our representation with another model of Norican-Pannonian type. In addition, the woman was wearing a pair of trousers made of dark red cloth whose dyed with madder. Such fragments were detected in the knee area. The dress of our presentation consists of a dense silk fabric, the jacket of wool. Pursuant the textile finds of the Great tomb of Čuguno-Krepinka dating at the same time we decided to use color-combination of purple and beige.

At the feet the Sarmatian woman was wearing short boots made of leather, which were originally embroidered with countless small gold pieces which are not (yet) decorated in our presentation.

The Sarmatian woman wore a diadem on her head decorated with different stones on which a veil was attached, which was detected by the tiny textile remnants. It consisted of a gauze-silk fabric, which appeared transparent with its extremely fine weave and was colored in a shade of pink with safflower (Carthamus tinctorius).

read on...
The tiara was originally adorned with various chalcedon- and carnelian-beads. Mounted in the center was an exceptional amulet in shape of a frog. We have reworked this beautiful pearl out of soapstone.

In addition to countless other vessels, ornamental objects and other artifacts were also found some alabaster vessels in the grave. Due to the lack of infomation about the grave complex in Sokolova Mogila it was not possible for us to determine which form each Alabastron had. Therefore we use this beautiful globular vessel as a placeholder.

The necklace is a replica of a find from the 2nd – 1st century BC from Alitub. Our necklace has big melon beads from glass and smaller, spherical beads of carnelian like the original. The necklace comes from a grave of a rich female Sarmatian.