As in the case of the Scythians , the term “Sarmatians” is a collection of different peoples characterized by a nomadic way of life, similarities in material culture, and an Indo-European language family. Like the Scythians, the Sarmatians buried socially important persons in Kurganes (grave mounds), the main source of archaeological finds. In addition to the classical burials (weapons, foodstuffs such as meat, sacrifices, everyday objects), the rich burials also contain luxury goods from the Greek colonies and Roman provinces as import goods which are evidence for the extensive trade, as well as extensive raids.

Similar to the Scythians, which were presumed to have been expelled from the steppe-belt by warlike expansion, the Sarmatians were also a warlike people, as can be seen from the grave attachments: especially lances, swords, arches and daggers as well together with defensive equipment in the form of scale-armours are always found in graves. Remarkable are weapons, which are found in the territory of the southern Ural foothills on the Russian-Kazakh border, also in women’s graves and are attributable to the 4th and 3rd centuries BC. In addition, there are also superbly decorated vessels made of clay, ceramics and glass, or filigree decorated toilet articles, such as mirrors and flasks, made of noble materials, which bear witness to the extraordinary and extensive trade relations of the Sarmatians.

Since finds from the lower levels of the population of the highly stratified Sarmatian society are almost completely missing, many of the graves were already looted in ancient times, and written testimonies only come from the “civilized” neighbors of the Sarmatians (Greeks, Romans) todays imagination of these peoples is very incomplete.

There are various scientific approaches to the early stages of Sarmatian culture. So far, the cultural and social context of early-sarmatic and sauromatic tribal associations has not been conclusively clarified yet – there is the theory that these were completely different strains. Other approaches suggest in the Sauromatians the cultural predecessors of the Sarmatians, while others see only different names for the same nomadic groupings.

However, based on the evaluation of specific properties of the material culture, it is possible to identify different groups. According to Sulimirski, the so-called Prokhorovka culture (early-sarmatian-culture) arose from a mixture of massagetic and sauromatic cultural elements. Beginning at the 5th / 4th century BC independent early-sarmatian cultural areas form themselves: the Saratov-group on the lower Volga, from which the Roxolans may have been emerged, and the Orenburg-group in the southern Urals, which are connected with the Aorses. In addition, there are the Bashikiran-group and the Cheliabinsk-group, which have strong local influences. Sulimirski emphasizes that the entire Prokhorovka culture can be regarded as heterogeneous, despite recognizable uniform cultural elements.

The Sarmatians replaced the Scythians and Sauromatians, which had previously dominated the steppes north of the Black Sea, after being the first wave of newly nomadic tribes in the 4th century BC as a result of great changes in the people’s migrations, arriving the area between Don and Danube. 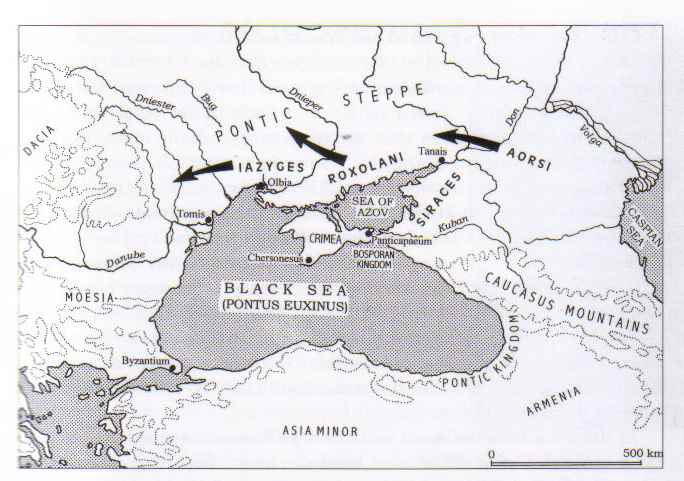 This early beginning of the migration of peoples is very complex and can’t be fully reconstructed today, but it shows clearly how the diverse influences of the nomadic cultures in the Eurasian steppe-belt came from: after the Hsiung-nu had driven the Yüeh-chi and Wu-sun on the Chinese border , urged the latter to Bactria and North India, causing a repression of the Central Asian Saka. By this shift, nomadic tribes reached the Black Sea region. Later, through these numerous stations in their migration, various influences from Central Asia and Bactria are found in Sarmatian culture.

Sarmatians can be divided into different tribes by means of written sources, which in large parts is confirmed by archeology. Especially by Strabon many traits and tribal names of the Sarmatians are handed down.

Probably the earliest tribe which can be comprehended both archaeologically and literally north-east of the Asovian Sea in the fourth century BC, are the Siraces. This group is distinguished by a material culture, which is hardly different from that of the Sauromatians. Apparently, there was a peaceful coexistence of both groups in this area, which ended with a complete assimilation of the sauromatic culture in the course of the 4th century BC. In the 2nd century BC, the Siraces had expanded so far that they occupied the entire area at the lower reaches of the Don River up to the Caucasus foothills in the south. From this point onwards, they apparently took a very active part in numerous battles and wars.

In the 2nd century BC, a tribe west of the Don emerges, which partially replaces the Siraces resident there and is the bearer of another culture which carries elements of an Eastern origin. These are the Aorsi, who, according to written sources, lived in enmity with the Siraces.

In addition to the Siraces and Aorsi, other Sarmatian tribes settled in the area around the Black Sea from the 2nd century BC: Iazyges could be found at the Danube region, Roxolani occupied the vast steppe areas between Dnieper and Don.

At the 1st century AD, a new group appears at the Don, which bring with them a culture in which strong influences from Central Asia and the present Chinese border or the area around the Altai can be found and which is clearly different from the existing elements of Sarmatic material culture. These are the Alans, which are controversially discussed in science. While some researchers consider the Alans invariably to be the Sarmatians, other scientists tend to regard this tribe as an independent group. As often the boundaries between different peoples are very blurred and fluid.

From the 3rd century AD onwards, the typical Sarmatian cultural patterns disappear almost completely in the Black Sea region, as the Sarmatians had to defend themselves against the invading Goths in the West and were destroyed by the Huns in the 370s. In spite of some Alans who retreated to the Caucasus (which are considered as the patriarchs of today’s Ossetians) and other groups of aliens who traveled with the Vandals to Spain and North Africa, the Sarmatian culture disappeared almost completely from this time onwards.