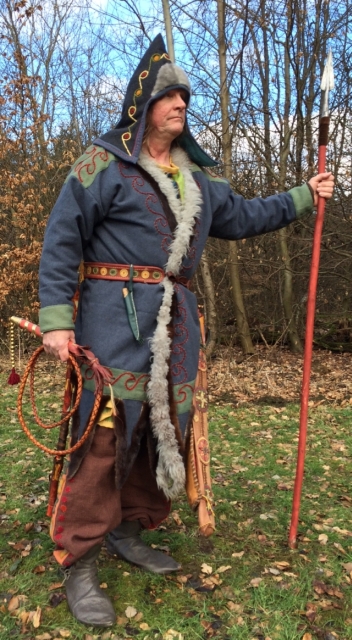 With the beginning of the establishment of Greek colonies (Apoikiai) along the coasts of the Black Sea (between about 750-550 BC) the colonists in the northern Black Sea region were in close contact with the Scythian nomadic tribes. In addition to occasional military conflicts, there were also lively commercial and cultural exchanges between the two parties.
While some Scythians (at least temporarily) also settled down founded own quarters in the Apoikiai and even established own settlements supplying the colonies and Greek mother cities with cereals, the nomadic tribes delivered mainly skins, woods, animals and slaves. In return, the “barbarians” got particularly wine and Greek luxury goods, as numerous finds in the kurgans of princely elites testify.
Our Scythian belongs to a higher-ranking warrior elite. This is reflected in the ornate with elaborate embroidery and fur hemming dress like the hinged coat, just as also provided in the embroidery of the typical pointed hat.
The sophisticated weaponry is evidence of a higher-ranking status in the highly stratified Scythian society. A composite bow in a Goryt was the main weapon of nomadic horsemen. There is also the typical Akinakes (short sword). A thrusting spear and a whip round off the equipment. Whips were not only dreaded weapons but also rank and status symbols.