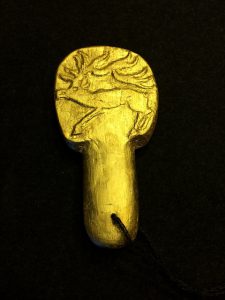 Mirror can be found in many temporal Scythian tombs of the 5. up to 2. Century v. BC in Siberia and Central Asia. Most of the still remaining today mirrors represent grave imitations, i.e. made specially for the burial rite and grave goods pieces made of wood, unprocessed bronze or often repaired and broken mirrors. Sometimes a mirror at the funeral was also broken and given his items in the Tomb. You should be the deceased in the otherworldly world available. It is to assume that the mirror had a magical ritual function for the nomads in addition to their value as a commodity. Often they were decorated on the back with theriomorphen motifs, the hoofed animals (such as Deer or RAM) or predators (such as Showed bears or mythical creatures). These representations are probably related to the myth of widely known throughout Central Asia of "cosmic hunt": according to him, devouring a – usually a deer – hoofed mammal, which symbolizes the moon a robbery – or mythical beast on a regular basis. The result is this myth in a lunar eclipse.

The prominent appearance of mirrors in all cultural areas of the iron age Eurasian steppe points regardless of the semantic content of the image content on their back to their symbolic role in the life of the nomads.
Literature:
Kubarev, Vladimir D. (1996): Mirror of Asian nomads as a religion-archaeological source. Eurasia Antiqua 2: 320-345.

No comments so far. Be the first to write one.

This site uses Akismet to reduce spam. Learn how your comment data is processed.