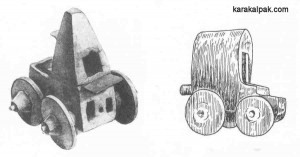 Toys from Scythian childrens graves made of clay.

[peg]About the shelter of the nomads, we know from Herodotus that the Scythians lived in a kind of caravan. Vehicle-constrctions are known from the permafrost graves of the Pazyryk culture in the Altai as well as miniature figurines made from clay. The latter show lovingly designed different models, which were drawn by oxen and offered space for several people.

In addition, the nomads are likely to have simple tents, but you do not know about them. A rock carving of the Tagar culture (9th – 3rd cent. BC) in the Minusinsk basin shows a scene in which, in addition to block huts, hemispherical dwellings with an upper tower can be seen.

The wall painting from a Bosporanian burial chamber is interesting in this context. It dates to the 1st century AD and most likely shows a yurt.

The structure can’t be determined precisely, since it can’t be seen whether the tent is supported by rods or a scissors-wall, but a yurt can be assumed because of the external form, which is very similar to today’s Kyrgyz and Kazakh yurt types. 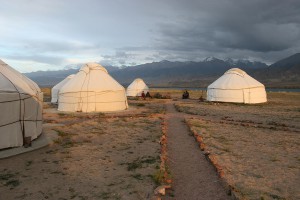 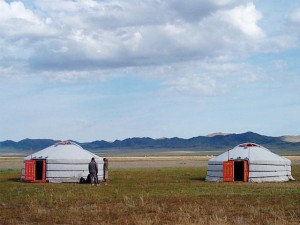 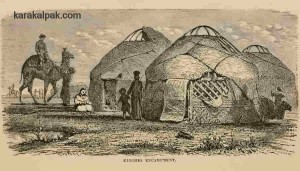 Kasakh Yurts on a historical picture

Taking the picture as the basis, we decided to build a yurt as shown on the wall painting. We took the external form from the picture, while we had to resort to the ethnographic material of today’s yurts in the construction (scissor-wall, roof ring, roof poles, door, etc.), since optional findings allow no conclusions. We looked for models in Kazakhstan and Kyrgyzstan, because there the yurts (in contrast to the Mongolian “Ger”) have a very steep roof with a semi-circle top, as can be seen on the wall painting.

The yurt consists of three scissor-walls (Khana, a total of approx. 90 poles), a door, 40 roof poles, a roof ring and countless rope, which is necessary for the lacing. Each segment can be divided so that it can be transported in a space-saving manner. In the case of materials, we had to accept transport and climate-related compromises. There is nothing known about the materials originally used, but it is assumed that similar fabrics were used in traditional yurts: leather, felt, wood, rope and wool. However, a yurt constructed in this way would weigh about 300 kg, which would have been a problem for us in terms of transport technology. This is why bamboo was used instead of wood at the scissor lattice and the roof poles. We had to make a further compromise with the material for the canvas: here, too, a combination of felt and leather would not only have become very difficult but would have begun to rot and mold in the humid Central European climate and attract vermin. This experience was made by a variety of yurt owners, who brought yurts from Mongolia to Germany and had to realize that the classic material is not suitable for our lines of latitude. That is why we have provided our yurt with an “onion skin system” of four different layers each with approx. 42m². This allows us to adapt it to different weather conditions. The outermost layer consists of fabric under which a plastic canvas is laid so that the yurt is tight in the rain. Underneath is a layer of thick fabric to protect against cold. From the inside everything is covered by a further thin layer of fabric so that no modern materials can be seen from the inside. Building up the yurt with all layers exclusive interior lasts with four people about three hours.

Our do-it-yourself construction of a yurt

In winter 2012/13 we tried to build a small (4m diameter) yurt. The result can be seen in the galleries.

The bamboo poles for the scissor-walls were sawn all over their length and drilled and tied together at the hinge points (8 per bar). In order not to have to measure each rod and each hinge point individually, I have first built a saw and drilling jig from a roof batten. 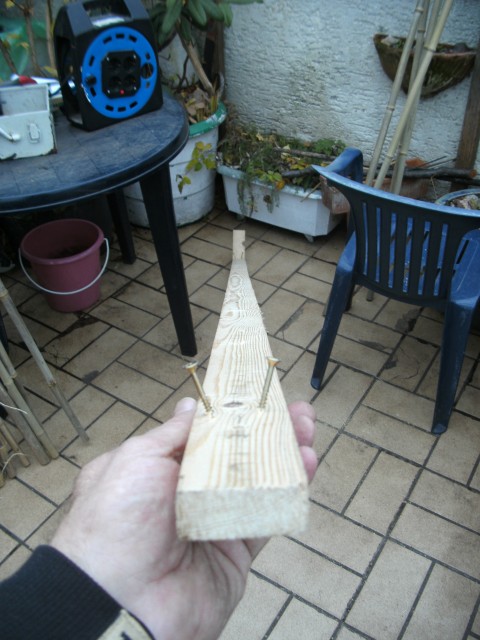 Drilling jig for the poles of the scissor-walls

Here, the bamboo rod has already been sawed and inserted into the drilling jig. 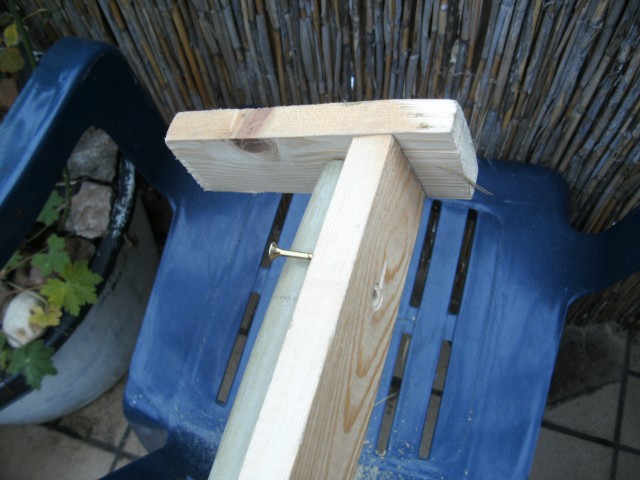 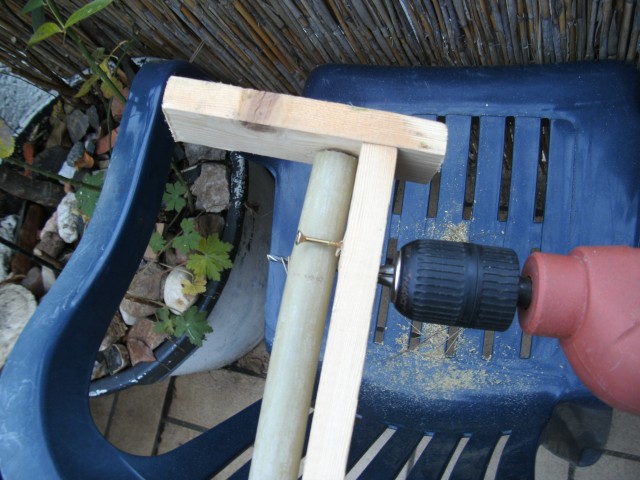 Now you have to drill the holes. 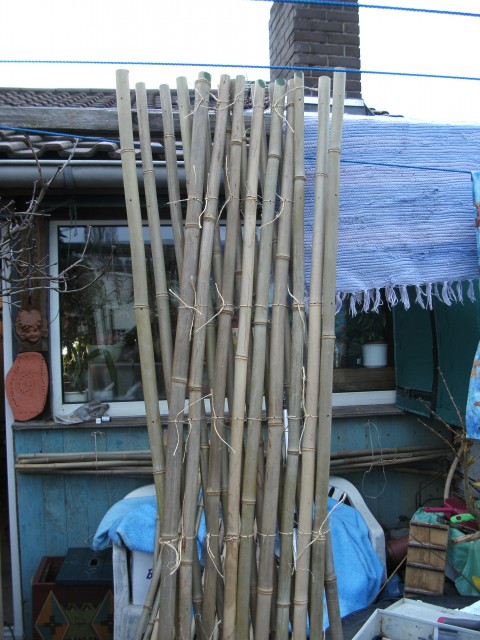 Here is a half-finished, knotted scissor-wall.

Three scissor-walls (with door) give a circle of about 12.50 m circumference or about 4 m diameter.

Here is a link to a page with a so-called “Yurt-Calculator” “Yurt-Calculator”.. You enter diameters, heights, etc. and the tool automatically calculates the required material: the number and lengths of the poles, the blank and the square of the canvas, etc.