There are currently two hypotheses regarding the origin of the Alans or Alani. The first states that the Alans already constituted a union of different Sarmatian populations, living on the steppes in eastern Russia towards the beginning of our era and thus before the appearance of a group of such a name in Roman literary sources. According to the second hypothesis, the Alans came to Europe from Central Asia, having subdued the indigenous Sarmatian tribes. Whichever is correct, all researchers agree that the Alans known in Roman times in the Ponto-Caucasian steppes encompassed several Iranian speaking peoples of indigenous or Eastern origin.

Pliny the Elder (Historia Naturalis IV, 25, 80) was the first Roman authorto locate the Alans to north of the Black Sea. However, by the time of Nero’s reign, Seneca (Thyste, Akt IV, Szene 1), was already mentioning them as opponents of the Empire on the Danube. Josephus (Titus Flavius Josephus, War of the Jews VII 7, 4)) speaks of the Alans invasion of 72 from Meothide, 1 on the Azov Sea towards the Transcaucasia to the Near East. Before the second half of the first century other reports are vague and unreliable. 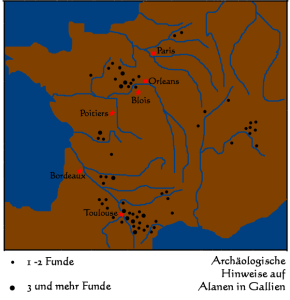 Bachrach interpreted in his treatise on the history of Alans in the West (Bernard S. Bachrach, The History of the Alans in the West, University of Minnesota Press, Minneapolis 1973) several former and still existing French place names as originally alan: ‘Alan’ south of Toulouse ; ‘Alos’, ‘Algans’, ‘Alaigne’, ‘Moulin de Lange’, ‘Lanet’, ‘Lansac’ between Toulouse and Narbonne; ‘Alancianus’ and ‘Alenya’ south of Narbonne on the Mediterranean coast. The Alans should probably back up the troops to protect important Roman roads connecting northern Italy and Spain and the routes from the coast to the Gallic outback. After crossing the Rhine, some Alans settled as peacekeepers in northeastern Gaul between Paris, Tournai, Trier and Langres and protected the major routes from the Rhine into Gaul. Just southwest of the Seine between Paris and Orleans and northern Italy as protection for the Alpine passes. Many place names refer by Bachrach on Alans branches : ‘Aillianville’, ‘Alain Court’ (up to 3 times), ‘Alain’, ‘Halaigncourt’, ‘Alain Court-la-Coté’, ‘Allamont’, ‘Allancourt’, ‘Alland’huy , ‘Allaines’ (2x), ‘Allain’, ‘Allainville -en-Drouais’, ‘Allainville-aux-Bois’, ‘Allainville-en-Beuce’. In Italy: Mt. Rosa Alagna, Alagna, Alagna Lomelina, Allegno, Alano di Piave.
Many proven earlier medieval names of the aforementioned locations give more explicit instructions (see supra). Other place names point to an even earlier settlement by in Gaul and northern Italy (presumably by the Alans displaced) immigrated Sarmatians: Sarmato and Sarma rate in northern Italy; Sermaise, Sermoise, Sermiers and Sermaize-les- Bains in Gaul.
In 411, Goar’s troops supported the proclamation of the usurper, Jovinus, at Mainz, in 414, the Alans were again mentioned during the wars between Romans Visigoths in southern Gaul. In the 440s, two groups of Alans installed themselves close to Valence according to some, or near Orleans, according to others, under the protection of Aetius, the military governor of Gaul. We do not know what extent these Alans were linked to those involved in the wars of the years 406 – 414. In any case, they form part of the defense system of Gaul and served to crush the revolts of the Gallic- Roman population, notably in Armorica, as well as to defend the country against foreign enemies. 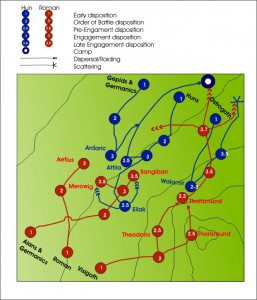 The Alans, under the leadership of Sangiban, fought alongside the Romans in the battle of the Catalaunian fields against Attila, although their allegiance was somewhat in doubt. Around 460, the Alans participated in the wars in Gaul and then, led by king Beorgor, left for Italy. In the peninsula, the presence of Alan soldiers in the ranks of the Roman army is well documented in the fifth century. In Gaul, on the other hand, after 461, the Alans disappear from written sources.
Those who arrived in Hispania, originally led by Respendial , now replaced by ADDAC , team up in the year 429 by the Vandals and Suevi . They played a dominant role in this alliance. The barbarians divided the conquered country with the result that the Alans took the middle part with the provinces of Lusitania and Charthageniensis in possession. Beaten by the Visigoths , from Aquitaine in the years 416 – 418 but arrived , they were forced to place themselves under the protection of the Vandals , whose king was now called, from now on rex Vandalorum et Alanorum . In 429 the Alans finally left Spain followed the Vandals in their further conquests in North Africa . Henceforth they are no longer to be distinguished from the Vandals . The Africa – Alans are no longer present as a separate unit in written records and other evidence that could identify them , have not yet been found.

Literature: Exhibition-catalogue: “Rome and the Barbarians. The Birth of a New World”, Palazzo Grassi Venice 2008.”
Bachrach, Bernard S.: A History of the Alans in the West. From Their First Appearance in the Sources of Classical Antiquity through the Early Middle Ages, Minneapolis 1973.